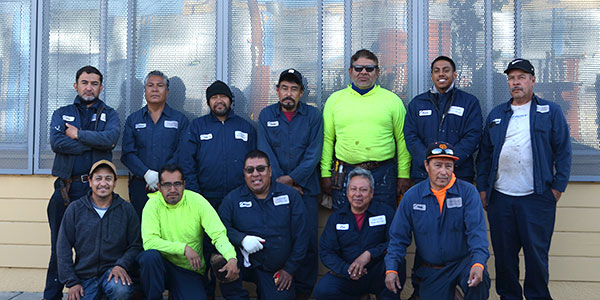 Thank you for considering Excelsior Roofing Co. for your reroofing and/or repair project. Excelsior Roofing Co. is San Francisco’s oldest roofing firm. We have been family owned and operated since 1906. Mark Powers has been an employee since 1972 and became owner in 1983, the same year Excelsior Roofing Co. incorporated. We are an 80% residential, 20% commercial reroofing company. We are considered experts in leak detection and try to take a common sense, rather than an aggressive, approach to roofing problems.

We are proud to represent a Union shop that employs, on average, fifteen men, all members of Roofers Union Local 40 S.F. All our labor employees have obtained, or are undergoing, a three-year State approved apprenticeship training program. We also are active in keeping current with safety practices and standards. An active foreman is on site, overseeing all jobs.

All materials used are of high quality, which are stored in our warehouse, bought, and paid for prior to reroofing your property.

Excelsior Roofing Co. has been featured by local television and newspaper publications. We remain available to all press, television, and radio.

Mark Powers has been with Excelsior Roofing Co. since 1972. He returns all phone calls, emails, and requests for online quotes on a daily basis. He is available to answer all questions that arise prior to, during, and after any job.

Mark feels that anybody who hires Excelsior Roofing Co. is getting the absolute best of what San Francisco has to offer. We are without a doubt experts in our craft, which can also include problem-solving. Due to our longevity, we have distinct opinions about what you’re best options should be. We welcome the opportunity to serve you.

Bill Powers began working on roofs with his Father and brothers during summers in his high school years. Bill has worked with Excelsior Roofing Co. full-time from 1979 to 2021 and is now working part-time.

Eduardo started roofing in 2003 for other companies and was hired by Excelsior Roofing in 2006. He completed his Union training in 2008. He has worked full-time on the roof since 2006 and this year, as Mark starts to slow down, he brings expert assistance to all facets of Excelsior. His daily duties are supplying needed items to individual crews, estimating, problem-solving and assisting customers with their many concerns and needs. He also is acquiring all permits for us and has brought some higher tech to the business which is helpful to all.

Rebecca has been a part of Excelsior Roofing all her life, but she took on all administrative tasks in March 2016 after having her first child, also Mark Powers’ first grandchild, Charlotte. After a career as a legal assistant and case manager for a top tier law firm, Rebecca brought her stellar office skills here to manage the bookkeeping, estimates, contracts and general administration tasks. It is due to Rebecca’s efficiency and organization skills that we are able to get your information to you so quickly.

Our crew has been with us on average of 10+ years. We have two foremen, Roberto and Rogelio. All crew members are part of Local 40 and have completed a state-approved apprentice training program. All crew members participate in weekly safety meetings and occasional specific training.